Bigger than Hollywood. That’s what the app industry is, according to Business Insider UK. Estimates from Statista say that the worldwide mobile app revenues exceeded $50 million. At the same time, the emerging industry is highly competing as it doesn’t know borders.

More than 3 million apps are currently available in Google Play and AppStore altogether. So how should you stand out? I advise you to put ASO – App Store Optimization in practice.

App store optimization is a process of improving the visibility of a certain app in the corresponding app store. Similarly to SEO, it uses the tools or factors available to improve rankings and downloads accordingly. The app store search still accounts for most app downloads, so visibility is highly important. You would imagine that most publishers use ASO as a standard pre-launch procedure. The truth is: it’s often discarded or done just before submitting the app to the store.

This then is an opportunity to increase your visibility towards the target market and multiple effects from your advertising money – ASO might you a competitive advantage over similar apps. We compiled a quick guide with key steps to help you do just that.

1. Drive traffic to your app

There are several ways to drive traffic to your app that are completely free.

While it won’t increase search results directly, it should increase the initial number of installs, which will help later on.
First, compile a pre-launch calendar where you will set up a schedule of articles and posts which you’ll use in this initial boost.

The app’s title should be descriptive, unique and short. Under 25 characters. Longer titles do not fit on most screens and won’t be shown entirely, which is something users don’t like. It’s beneficial if one of the keywords is included in the title. Kissmetrics reports 10,6% more downloads for apps with a keyword in the title. However, avoid keyword stuffing.

Since most users find apps searching the store, keywords remain very relevant. You have 100 characters to use, so choose wisely. Try different keywords than the competition. Use customer reviews and feedback to help you find the secret sauce.

Apps with more downloads rank higher. This means your marketing efforts should be distributed wisely over the range of time. First advertising boost will mean more installs, which will, in return, yield better ranking, later bringing on more downloads and so on. Make app recommendation as easy as possible – use the power of advocacy.

More reviews and ratings are surely good, but not by any price. Make sure you have an in-app channel for providing direct feedback, which should help you direct the users with bad experience to your team, instead of leaving bad reviews.

Most users go TL;DR so makes the most of your first few sentences. Talk less about the product and more about the positive change and value the app brings to the user. Bear in mind that AppStore users only see the first five lines of the description. If possible, do some A/B testing to see what works best. 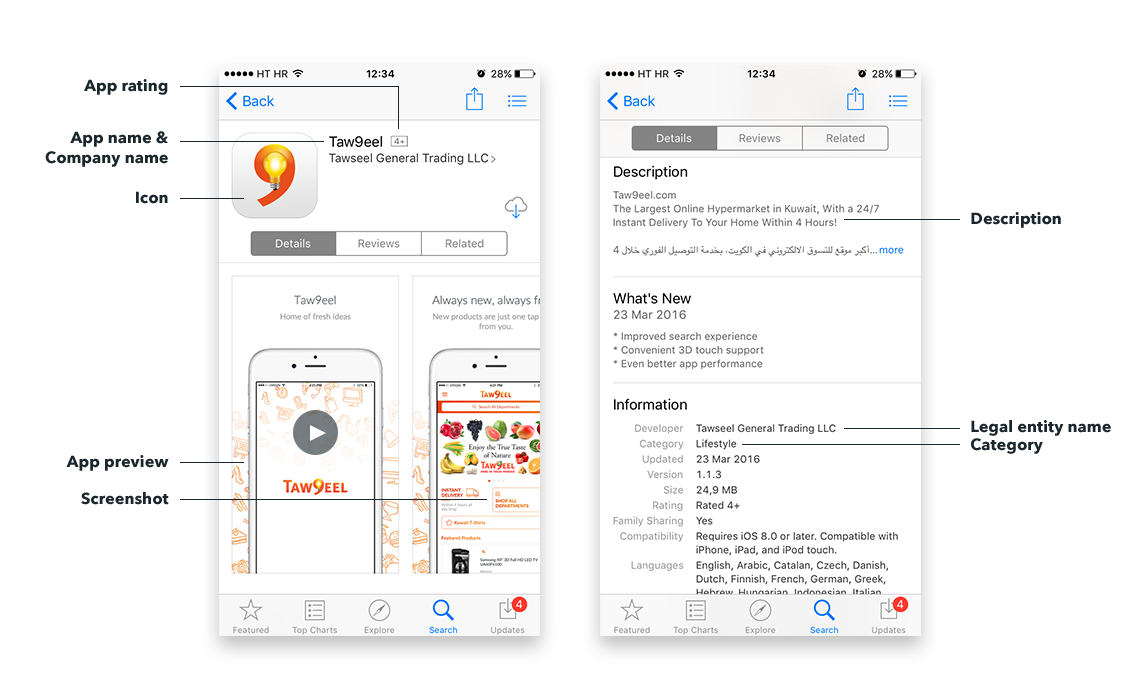 Some publishers use screenshots as a tool to display all key functionalities the app can offer.

You don’t. Better consider them as a showcase – demonstrate key benefits to the user. It’s best if you stay moderate with screenshots and display only a few, which will encourage the user to install the app.

Make the best of the icon – it’s the part of the app the user will see most often. If it’s unique and well crafted, the user will be eager to see what the app is all about. Additionally, the existing users like to click on nice icons. Trust me on that one.

About videos – while both of the major stores allow a short video, there is no proof they actually increase conversion rates. Since a quality production might be costly, it’s not as a must-have.

4. Differences Between AppStore and Google Play

Although both AppStore and Google Play track similar parameters, they measure them somewhat differently and give them different weight. Here is a simple overview of how app store optimization factors are ranked. 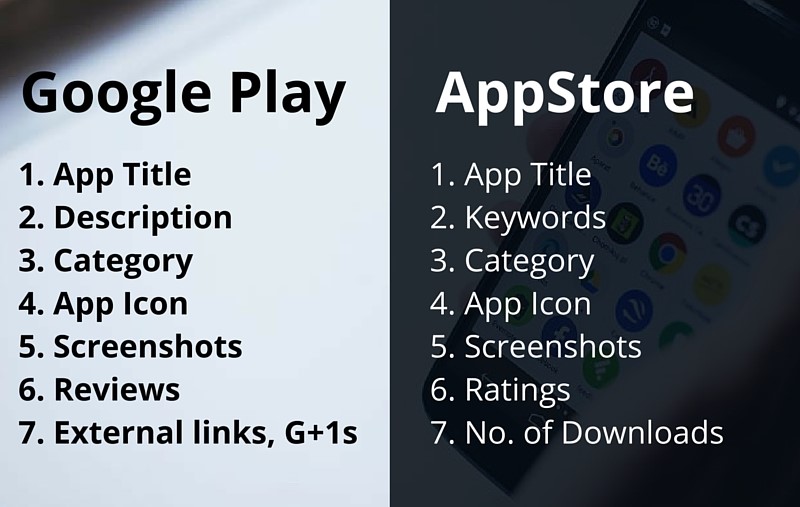 In order to get closer to people on local markets, you can add localized descriptions to both Google Play and AppStore. This is highly recommendable as most people aren’t comfortable with installing apps in languages they’re not familiar with. A few publishers reported that localization often paid off more than investing time in developing new apps.

In order to beat your competitors, you should know them first. Examine who they are and regularly check for new kids on the block. Which keywords do they use? What do their ratings say? Listen to their customers’ feedback and you might recognize new opportunities to improve your app or ASO factors.

App store optimization is about testing and actively searching for the right balance. Make notes of your changes and the effects they brought, which will help you evaluate strategies and gain valuable insights about your customers and their behavior.